Just 7 days after finishing the CCC in Chamonix, I was back at the starting line of a 100k ultra-race: The Mozart 100 in Salzburg, a 108km/4700m climb course in the scenic Wolfgangsee area. As I hadn’t expected to actually make it into the CCC and only got in through the 3rd additional draw, my 2021 race planning had included the Mozart 100 as season highlight. After the CCC I was a bit skeptical of recovering quickly enough to have anything remotely resembling an enjoyable experience in Salzburg, but I ended up quite able to walk again after a few days, and the bragging rights for finishing two 100k ultras in 7 days are nothing to be scoffed at. I had run a shorter version of the same course in 2019 (Race report here) , so for more than half of the total distance I was on familiar terrain which I already found to help tremendously in terms of planning and motivation at the CCC. My brother also had signed up for this race, his first 100k after about 8 years. 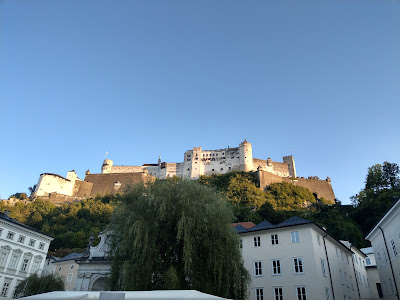 We started at a manageable time of 5am, and ran through the town center and suburbs of Salzburg until hitting the trails after about 8km. Here I figured out that assembling my poles in the darkness while walking was something that needed more practice to avoid serious injury, but at least I did not meet the same fate as a brave fellow runner who ran without headlamp and did a superman immediately after leaving the tarred section. I just did a quick water refill at the first aid station, and continued on to the next one, already looking forward to the second aid station’s toilet of which I had very fond memories from 2019. The trail was perfectly runnable, the weather perfectly fine, and nothing hurt critically yet. 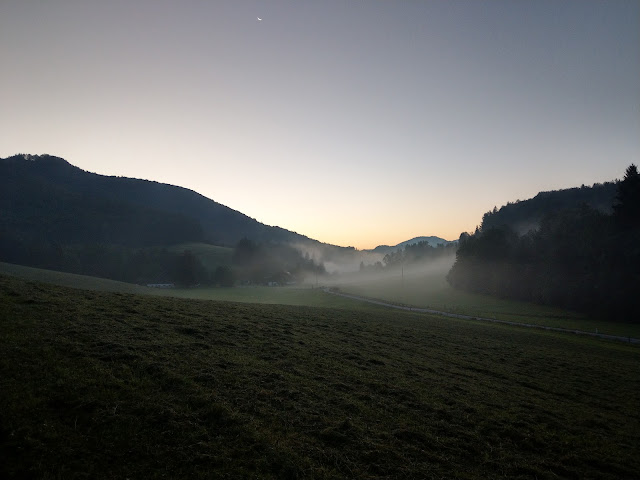 Arriving at the second aid station at km 20, I lost a couple of minutes until I had figured out that the toilet had been moved, and just when I was about to continue my race my brother also arrived which was a bit unexpected as I thought that I had gained more than just 5 to 10 minutes in 20km with more than 600m of climbing. But unshaken, on I went on the 10km stretch to Fuschl am See which was the halfway point for the shorter distance I ran in 2019. As in Fuschl am See we could store and twice access our drop bags, I switched from road running shoes (Clifton 7) to trail shoes (Speedgoat 4) and spend a couple of minutes refilling my bottles with my own isotonic powder. I left just when my brother caught up to me again, indicating that he was having a good race. 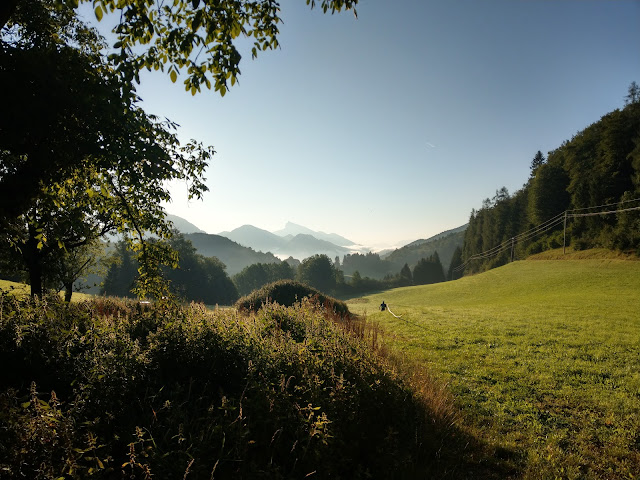 I had done the mistake of sitting down on very cold stones which very painfully locked up my groin area, so for the first 2km out of Fuschl I shuffled along rather than running, at one point even being close to calling an ambulance or it a day. Fortunately, with some movement the pain subsided, and I was moving smoothly again by the time we hit the first big 800m climb up to the Zwölferhorn. The course alternated between steep forest trails and runnable gravel sections, and finally led to a great panorama of the Wolfgangsee and the surrounding mountains, including the Schafberg which was to be climbed next. 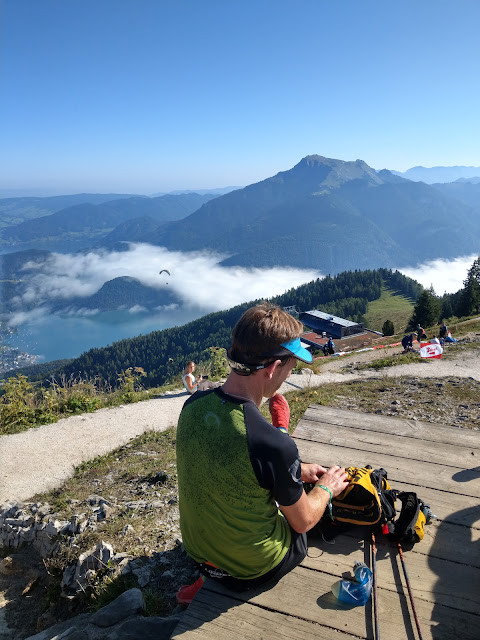 Next, we dropped down to St. Gilgen am Wolfgangsee on occasionally very slippery rocky paths to the next aid station. Here, it became apparent that we got very lucky with the race being moved from June to September, as the Mozart100 typically seems to take place on the hottest day of the year, but not so in 2021. The temperature turned out to be just right, as opposed to the 30°C+ we encountered in 2019. 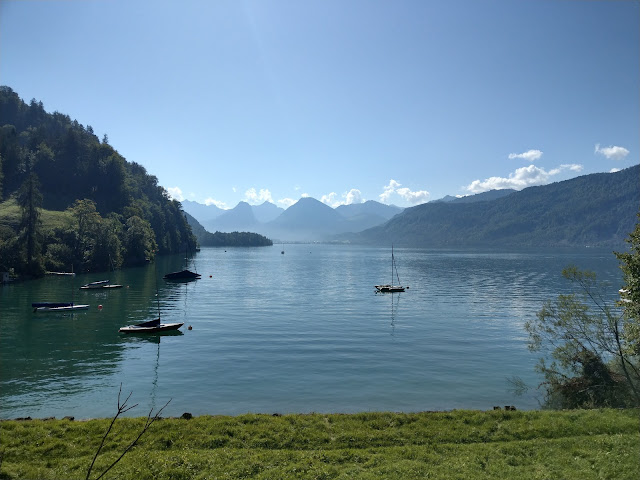 After St. Gilgen, the out and back route briefly ran on the same trail, and here I encountered the leaders of my own race who did not return my friendly greetings, though – presumably, they were already fairly deep in their pain caves at this point (~60km and more than 3000m of climb in). After a steep climb to the Schafbergalm we were again presented with a great panorama and a small aid station to refill water bottles, and then started on a fairly technical section back down to the Wolfgangsee. I was feeling quite alright at this point, particularly leg-wise, but during a short toilet break almost at the bottom of the descend my left knee suddenly started acting up badly. With roughly half of the distance left to run, this was bad news. 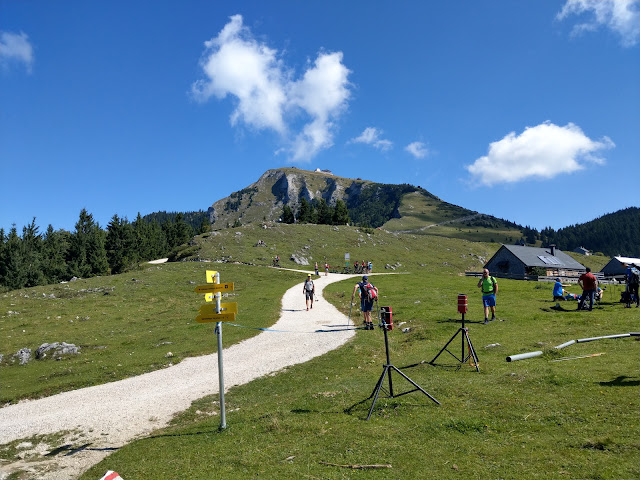 Particularly on downhills the angry knee was not happy at all with the overall situation, while on flats I could still run at a reduced speed, and do climbs without major discomfort. So I hobbled back into St. Gilgen which was an aid station also on the return leg, meeting and encouraging a couple of back of the pack runners of the shorter distance. I took a longer break at St. Gilgen, even trying the soup (excellent!) which I normally don’t do, to delay the inevitable – making it back to Fuschl and to Salzburg, ultimately. 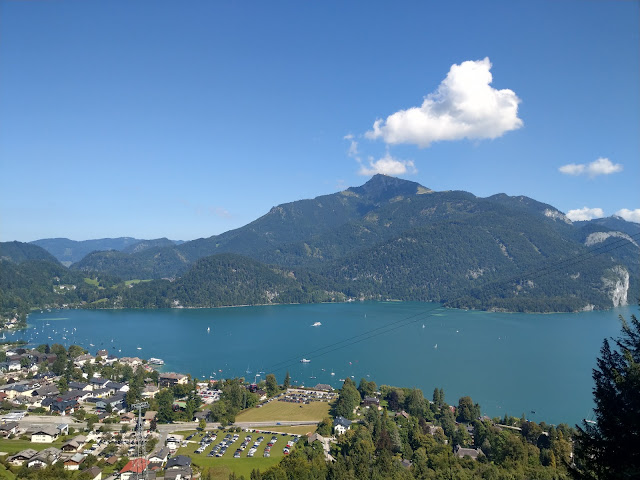 While I had expected the section between St. Gilgen and Fuschl to be fairly flat, it turned out that the organizers had managed to sneak in another 650m of climb into what looked like a flat section at first glimpse. However, as climbing was the least painful gear at this point I did not mind too much. Back at Fuschl, I took a longer break, also sampling some of the great aid station food - Red Bull cola is an acquired taste for people raised on Coke/Pepsi, though. A fellow runner was discussing his sprained ankle on which he had dragged himself along for the last 30km, so I considered myself lucky that I only had an angry knee to deal with. I briefly considered switching back to the Clifton 7s, but ultimately decided not to tinker with what was already broken and not expose my knee to an additional surprise. 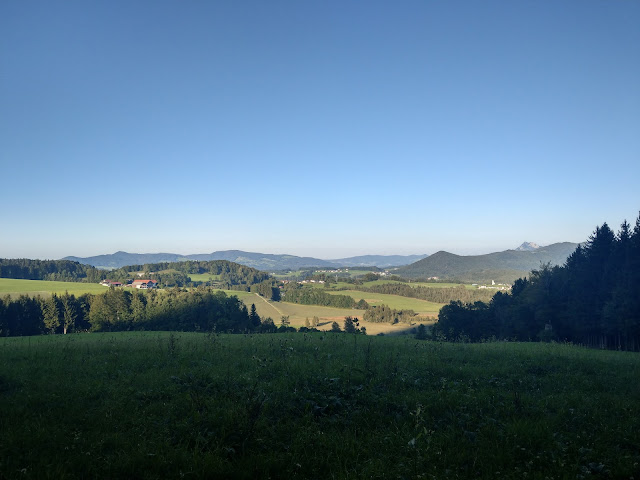 After Fuschl, we started the final 30km running on the opposite lake side of this morning’s inbound leg on a rolling trail that seemed like it would never end, just as I had remembered it from 2019. After the next aid station, me and a couple of other runners took a wrong turn by blindly following someone down- instead of uphill (path of least resistance), and then made our way to the last big climb up to the Nockstein. In 2019, I was struggling quite hard at this point particularly as back then I had not yet figured out how to best deal with blisters and the heat was intense, but this time, except for running a bit low on water, I was doing quite well at this point. I managed to reach the top of the Nockstein in time for a great sunset panorama, and then it was back down to Salzburg and up the Kapuzinerberg, 200m of climbing on stairs which I also found harder in 2019. 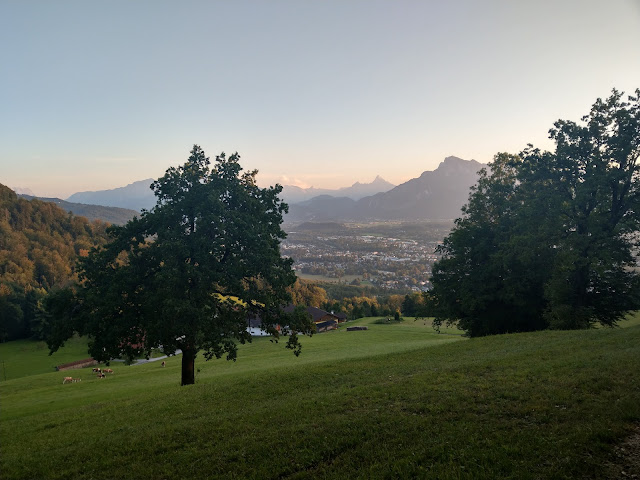 At the top of the Kapuzinerberg I had to take out the headlamp again before starting on the downhill which led into the town centre and to the finish. In the city, I had to stop at a couple of traffic lights, which another runner used as opportunity to overtake me by ignoring a red light. This triggered me quite badly, and despite taking a wrong turn just 200m from the finish I managed to catch up and pass him again before the finish line, muttering something along the lines of “thou shall not pass!”. I finished the race with a mad sprint on the last 100m in 42nd place with a time of 15:15h, arriving just in time for the awards ceremony which took place without even having a full podium in the women’s race. 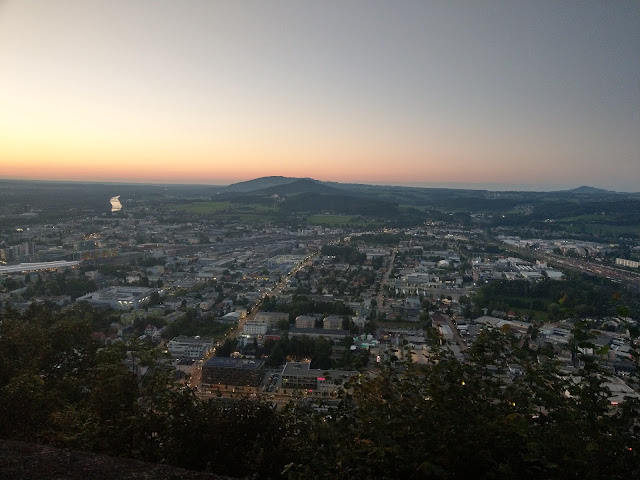 Overall, at least the first half of the race was surprisingly smooth sailing, while the second half was less of a walk in the park mainly due to knee troubles which would keep on bothering me for a couple of weeks. The Mozart100 will definitely be my go-to race if at some point in the future I need comparatively “easy” qualifying points (easy to reach from Munich, good trails and fairly low altitudes) for any of the UTMB races, and the Salzburg area, particularly in such a well-organized event, is really a joy to run in.

Email ThisBlogThis!Share to TwitterShare to FacebookShare to Pinterest
Labels: 2021 - Mozart 100

Trails and hikes on Outdooractive